Bhorge: Assessment of common infections related to steroidal treatment among children in selected hospitals, in view to develop an information booklet

Assessment of common infections related to steroidal treatment among children in selected hospitals, in view to develop an information booklet

The immune system is smart and has the ability to learn the “face” of a germ and remember it. Once your immune system has successfully battled it, most people are less susceptible to recurring infections caused by that germ. An immunodeficiency happens when your body lacks the ability to produce antibodies which attach to germs and destroy them.1 Secondary Immunodeficiencies result from various conditions including cancer therapies, bone marrow transplantation and immune-modulating drugs used to treat a variety of autoimmune conditions. People with immunodeficiency get the same kinds of infections other people get ear infections, sinusitis and pneumonia. The difference is their infections occur more frequently, are often more severe, and have a greater risk of complications.2

Corticosteroids are potent drugs used in management of various inflammatory and autoimmune disorders. Corticosteroids inhibit the immune system and increase susceptibility to infections including those associated with live vaccines. Infection can spread rapidly, may have an atypical presentation and the severity may be masked. A regular dose of corticosteroids for 1-2 weeks can make the patient prone to infection.1

Need of the Study

As per researchers view, in paediatric units there are patients with various steroid treatment comes repeatedly with various types of infection and after going through researches, researcher being child health nurse is motivated to assess common infections among children on steroidal treatment and provide education through information booklet regarding common infections in and its care.

Assessment of common infections related to steroidal treatment among children in selected hospitals, in view to develop an information booklet

Objectives of the Study

The study was conducted in selected hospitals of city.

Children on steroidal treatment admitted in selected hospitals and who meet the inclusive and exclusive criteria.

The sample size for the present study was 60 children on steroidal treatment.

Self-structured infection assessment checklist format, it was found to be the most appropriate instrument to assess common infections related to steroidal treatment among children.

The tool used for the present study comprised of two sections.

This section consists of 6 items for obtaining information about selected demographic factors such as developmental stage of child, Gender of child, duration of steroidal treatment, number of times of previous hospitalization and education of the parents.

This section deals with:

Distribution of samples (children) based on demographic data.

According to developmental stage 51.7% of samples were Schooler and 48.3% of them were Pre-schooler.

According to gender 66.7% of samples belong to male gender and 33.3 % belongs to female gender.

Analysis of data related to common infections related to steroidal treatment among children. 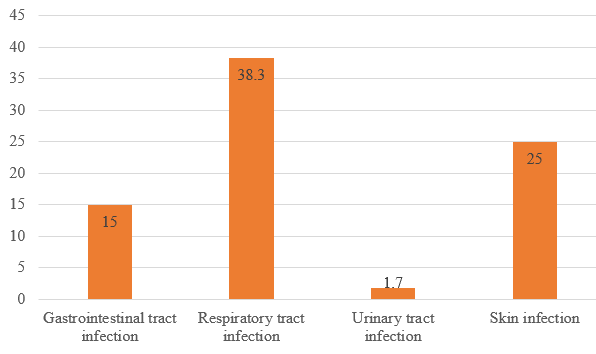 On the basis of the findings of the study following recommendations have been made for further study.

The authors declare that there are no conflicts of interest in this paper.

© This is an open access article distributed under the terms of the Creative Commons Attribution-NonCommercial-ShareAlike 4.0 International License which permits unrestricted use, distribution, and reproduction in any medium, provided the original author and source are credited.

Get article permission for commercial use